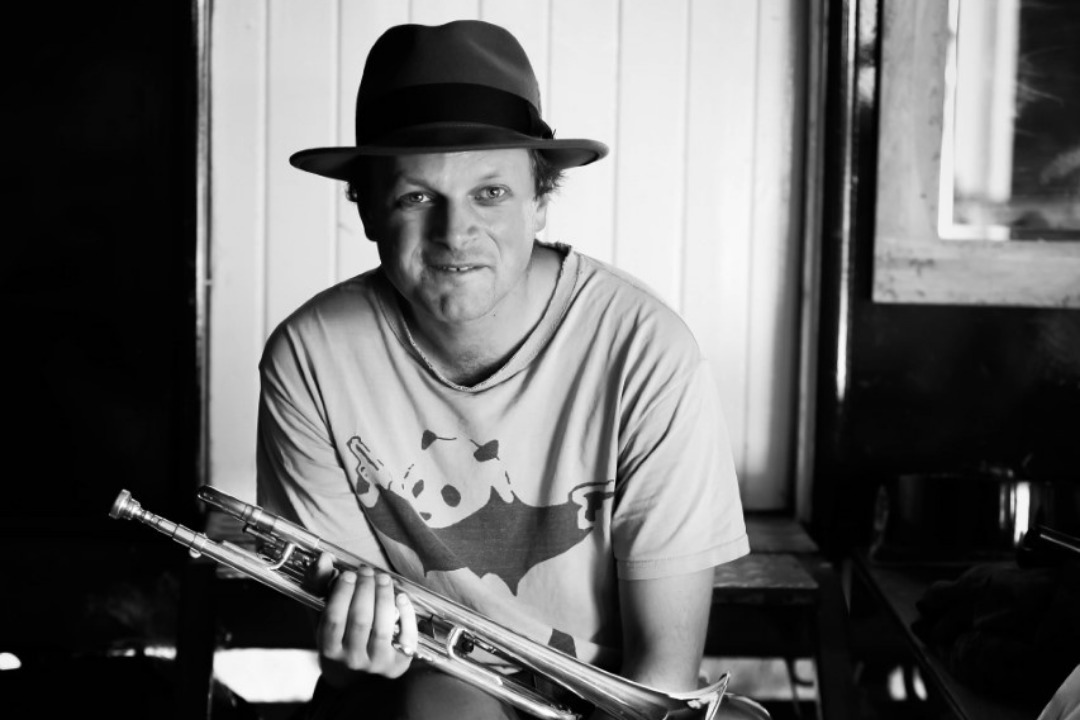 Sophie Wales catches up with trumpeter and composer Rowan Porteous.

We’ve been checking-in with artists throughout the South to see how their lockdown experience has been, and how they’ve been adjusting to the new normal.

Not long after I started learning trumpet, when I was about 8, my dad got me a cassette of Louis Armstrong. After that I kept asking him for more cassettes and I think I was on Miles and Dizzy within a few weeks. Bitches Brew had a huge impact on me. I was also lucky that he took me to quite a few gigs as well, including Arturo Sandoval, Roy Ayers and Mike Gibbs at Grimsby Jazz Festival, which was a real formative experience.

The tune from the Fererro Rocher ad, because it instantly stamps itself on your brain whether you like it or not, and thrillingly, it has no beginning and no end.

Also, ‘From the Green Hill’ by Thomasz Stanko. That doesn’t begin or end either.

Also, ‘Winter Memories’ by Billie Bottle and the Multiple.

I enjoyed Randolph Matthews piece on Jazz South Radar Sessions. I’ve also been having a bit of a techno resurgence. Jazz and techno are linked for me, and I really love people like Jeff Mills. Lately I’ve been getting into Nina Kraviz and Paul Kalkbrenner. It’s incredibly powerful music.

I’m also into Soul stuff like Robert Glasper and Hiatus Kaiyote. Van Morrison has had a huge effect on me and I think he’s influenced the way I play trumpet. I’ve also been listening to my friend Marco Piccioni’s album ‘Far’, which is different music again.

Without a shadow of a doubt, Wayne Shorter and his quartet in London in about 2007. I was so inspired by his approach and his whole attitude on stage that I started getting into Nichiren Buddhism, which he practices, and I’ve been practicing ever since.

He just radiated this total honesty, openness, and courage, and that came across in the music. He put out a book of dialogues with Herbie Hancock and Buddhist teacher Daisaku Ikeda, which is an amazing introduction to both jazz and Buddhism.

Don’t! There isn’t! It’s like asking the trees or the air how they’re going to adjust. We shouldn’t adjust to any current situation at all. The situation should adjust to us. Nietzsche observed that “without music, life would be a mistake.” Nobody wants to be miserable, so society must organise itself in a way that supports music.

As musicians, we just have to determine to keep going no matter what. We also need to make sure, first and foremost, that we truly value the work we are doing. If we can truly value it and see its crucial importance, then we can become part of a change towards a society that supports it, and do whatever is necessary for that goal. My Buddhist practice helps me to keep on seeing it like this.

Yes, including this new one ‘Home‘ Billie Bottle on keys and vocals and me on trumpet.

After a long period of either being a gigging musician or working in nature conservation and education, or just being depressed, I suddenly found that I had original music to write a couple of years ago. This culminated in my band ‘The Other Way’ which would have had its first proper gig in March this year. I’ve now written two albums for this project, plus a lot of other songs that don’t exactly fit into an album. I’m determined that at least one of the albums will be completed in 2021!

Since the lockdown, I’ve been working on music I can do on my own with a small electronic setup, as well as writing new material and collaborating remotely. I’m lucky that my uncle Martin Pavey is a brilliant producer, so he’s helping me with that.

All this music is a response to the ecological crisis, with a kind of groping towards a new spirituality. I call it ‘Dystopian Soul’.

I often work with multi-instrumentalist and singer Billie Bottle, who puts a different spin on things and has been an inspiration since we met on tour with the circus last year. We also work with great drummer Emma Holbrook. However, due to the complications of the “current situation” I’ve just done a livestream with a totally new lineup, featuring Zora Dryadic on vocals, Tim Funnel on keys, Pasquale Votino on bass and Andy Meredith on drums. I was excited to do this and to be able to get these great musicians together.

Gigs and hugs! The point of being a musician is to play gigs, and get hugs. There are various ideas floating about as to how to make gigs happen, including playing on the roof of my boat. The hugs will come after the gigs. Or before, I don’t mind.