10 awards of up to £1,250 were offered to composers at all career stages to create new pieces of original music for up to three performers. These were digitally broadcast in late 2020, generating inspiration and new material for live performances and touring in the future.

Josephine Davies has written a new piece, ‘The Language of Water’, for an all-female trio (Josephine Davies – saxophone; Alcyona Mick – piano; Tamar Osborne – bass clarinet). Performing at De La Warr Pavilion, Bexhill, the piece reflects her tumultuous experiences of the past year, strongly inspired by living by the sea and incorporating both the peacefulness and intense drama of the elements.

Rebeca Nash is described as “at the vanguard of innovative and compelling new music” by Downbeat Magazine, and with Nick Walters explores the concept of leylines, their effect on the natural world around them and how their energy can be incorporated and developed within a musical setting. Including reworked sound samples from Avebury, Wiltshire, ‘The Sanctuary’ is performed at St George’s Bristol.

Described as “dazzling improvisational skills, flawless and world class” (Chris Philips, Jazz FM), vocalist and composer Randolph Matthews has written a new piece telling untold stories of the lives of black sailors, charting a course in music through the often troubled waters of Britain’s maritime past. The piece is entitled ‘Black Salt’.

John Martin has written an exciting new piece ‘Life Cycles’, for double bass, drums and tenor saxophone. Building on the new sounds and concepts he’s been working on since the release of his acclaimed second album ‘Hidden Notes – Spirit of Adventure’, audiences are in for a real musical treat.

Oxford based composer and pianist Alexander Hawkins (“one of the most vividly distinctive (voices)…in modern jazz”  – The Jazzmann) explores new approaches for a ‘classic’ line-up of piano, double bass and drums. ‘Discoveries/Novelties’ was performed at St George’s Bristol.

Innovative composer, musician and producer Hannah Jacobs, whose recent work has featured on BBC Radio 2, 3, 6 and in Gramophone Magazine, presents a new piece taking the listener through a world of sonic textures, combining live modular synth manipulation with acoustic and vocal improvisation. ‘Ghost Fishing’ explores issues of climate change and sustainability, recorded in Hannah’s own studio, Upcycled Sounds, in Oxford.

Due to unexpected circumstances we produced a Spotlight podcast to profile John K Miles and his Radar Commissions piece. ‘River and Ash – Play a Mighty Groove’ is a reimagining of the myth of ‘Orpheus in the Underworld’ for 8-11 year olds, focussing on the themes of friendship and the power of music. It features John K Miles narrating and playing saxophone, flute and keys, with Winston Clifford on drums and Dave Manington on basses. 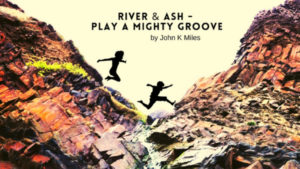 Subscribe to the series on Apple Podcasts, Spotify or find your favourite podcast platform here.