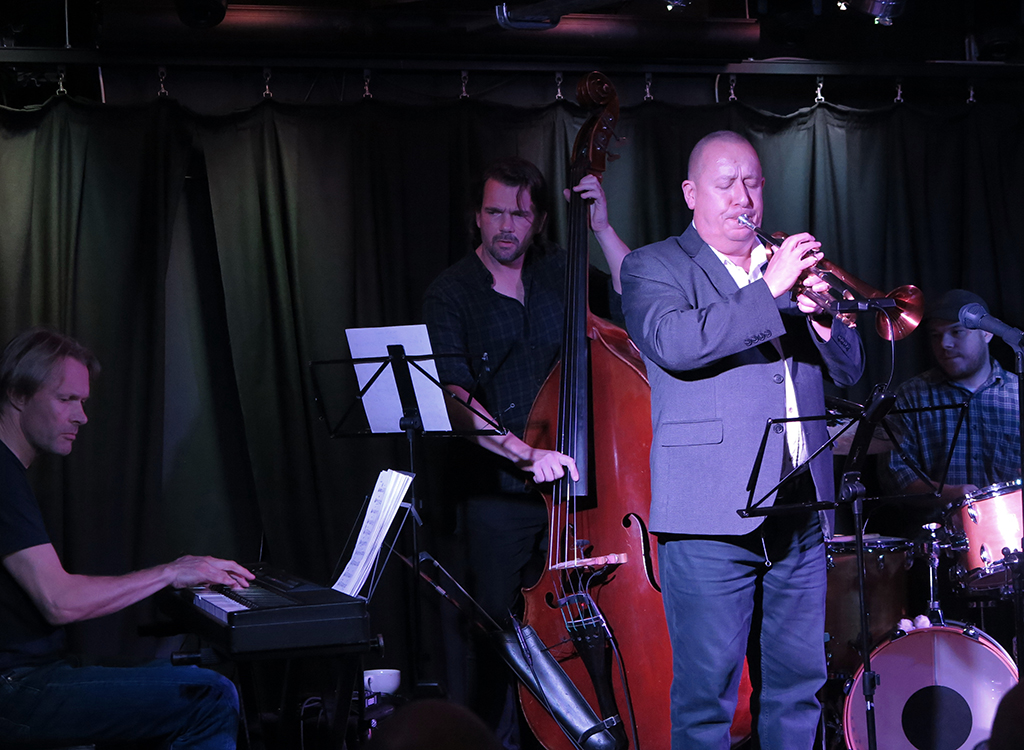 I was lucky to attend a school with a strong music department and can remember when I was about eleven standing outside the rehearsal room listening to the school big band playing, probably one of the Miller things like In The Mood or American Patrol – anyway at the time it sounded amazing and made me want to be able to join in.

Hmm that’s a really tough one, but I’ll have to go with the EastEnders theme for the royalties.

Well this varies wildly from day to day, but just by chance today has been Dave O’Higgins day.

I’ve recently started a Facebook group to promote UK jazz releases on Facebook and having seen a post from Dave I had to add his incredible big band album The Abstract Blues Big Band, co-led with his wife Judith and featuring many luminaries of the UK scene. It’s a reimagining of Oliver Nelson’s Blues & the Abstract Truth album. This led on to me listening to his Tenors Of Our Time album with Italian great Max Ionata. For a bit of light relief this evening I put on the Ronnie Scott’s big band recording live-streamed a couple of nights ago, and guess who was there in the sax section.

There are so many I could pick for this, but I’ll go with The Brecker Brothers at the Royal Festival Hall in 1992. They were touring to promote the Return Of The Brecker Brothers album and the sense of occasion was incredible. I think almost everyone I could think of from the UK jazz scene was in the bar before the show, some of them even went in to listen.

How has the Bristol jazz scene developed over the years? Do you think it’s an exciting time for jazz in the city (pre & hopefully post pandemic)?

I arrived at Bristol Uni in 1985 so have been around for long enough to see many changes in the jazz generations – but the scene has always been really strong and creative. I guess one of the developments over the past decade or so has been the profusion of good quality jam sessions springing up for which players are generally expected to be able to get up and perform without resorting to sheet music. There’s also been a resurgence of interest in earlier jazz styles tied in with the swing dance craze. However, if you pop in to a bar just up the road you are likely to hear some of the latest contemporary music. It’s all going on – or was, anyway.

Well Ronnie Scott’s has been putting out some great concerts as already mentioned, but coming up we have Denny Ilett’s Electric Lady Big Band playing the music of Jimi Hendrix with a mixture of Bristol and London players – Sunday 7th March. You can watch it here.

What can I say apart from try to hang in there? I am fortunate in that I have managed to keep at least some teaching going online. Ironically some of the very best players who only performed and didn’t have much or any teaching as a back-up have been hardest hit. Alongside that you’ve got people who were starting out in the profession who perhaps didn’t have tax records going back far enough to qualify them for the SEISS grants. Here’s hoping there is light at the end of the tunnel. I recently saw a cartoon of someone arriving at the light at the end of the tunnel, there was a sign on the wall saying Please Turn Out The Light.

Well yes I have, I wrote some new tunes during Lockdown 1, and then amazingly managed to do one gig with a new line-up between lockdown 1 & 2. We subsequently went in to the studio in early November to record my new CD Andy Hague’s Double Standards – Release. It’s a 50/50 split between standards and other people’s tunes vs. my originals. The CD has already had some really nice reviews and airplay on BBC Radio and Jazz FM. It’s available on my website here or on Bandcamp here.

Tied in with the previous question I’ve just spent half-term week writing a new big band arrangement for Ed Leaker’s Swing Machine Jazz Orchestra, which is based at Wells Cathedral School where Ed works. When possible a new big band album is in the pipeline, and it’s always a thrill to hear something you’ve written played for the first time.

I’ll also be trying to get the Be-Bop Club up and running again – I’ve been promoting jazz gigs in Bristol under this name for about 25 years. Between lockdowns I had a series of four gigs booked as a trial at a new venue for us, the Hen & Chicken in Bedminster, which has a large enough room to seat about 50 with appropriate social distancing. We did one triumphant gig at the end of October, and then I had to cancel the other three, so all being well my priority will be to reinstate those cancelled gigs.

Find out more about Andy Hague on his website and listen to his latest release on Bandcamp.