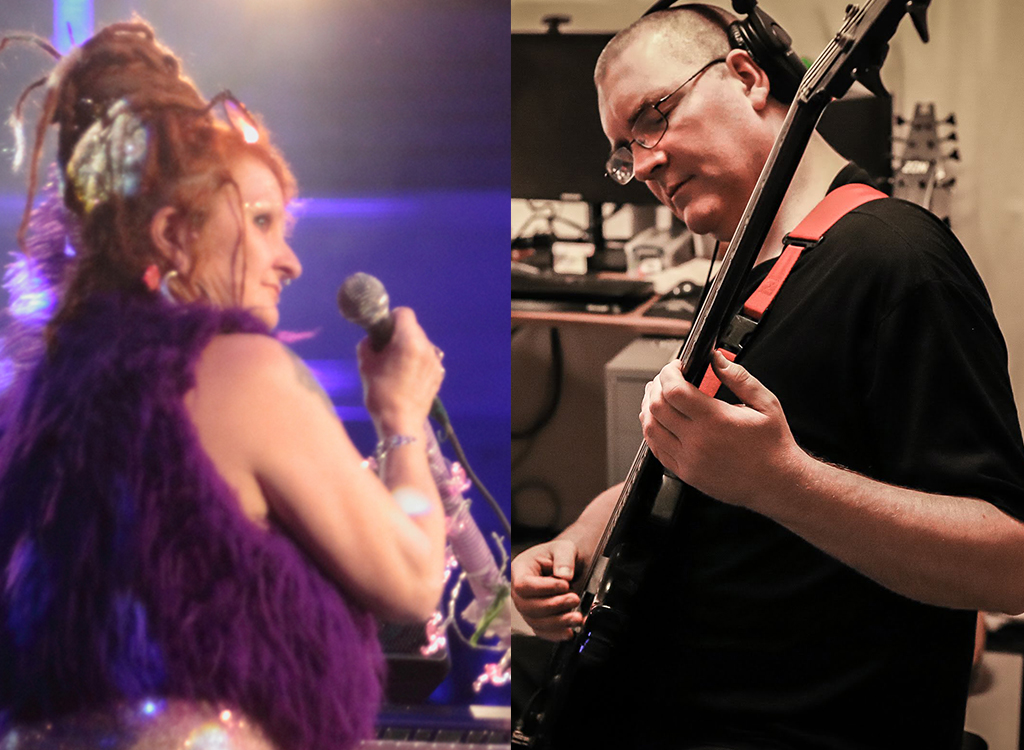 This week’s featured artists met online while attending Jazz South and Jazz Promotion Network’s online sessions. They decided to collaborate musically and have released a new piece of music, Ocean of Blue.

Kat: Miles Davies’ Kind of Blue. I remember lying in a cot with a white net curtain billowing through an open window, streaming sunshine. I was under the window and this album was playing. I was born in 1965 so maybe this memory is summer ’66. Both my Mum and Dad were massive jazz fans, and had been Ronnie Scott’s regulars in their pre-child years. When I hear this album I just think of lying smiling in the sunshine.

Al: Hard to say. My Dad listened to a variety of music but I don’t remember talking about genres when I was young. The first time I really remember being knocked out and knowing I was watching a jazz band was seeing the Devon Youth Jazz Orchestra and really feeling caught up in it. They also had a French horn player in the band at the time so I knew it was something I could join in with if I got the opportunity. I was probably about 11 and French horn and piano were my instruments at that time. I don’t think it had really occurred to me that you could play piano in groups as everything I’d done had been as a wind player and the piano was something I usually played on my own.

Kat: Be Good by Gregory Porter. It is the most beautifully evocative song, and in 3/4 my favourite time signature (or could be a slow 6/8, I’m not arguing!!!!).

Al: Where to even start! I’m going to say Hannibal by Miles Davis as the first thing to pop into my head. I loved the whole mix of moods, tension and release, arrangement – texture of this strange combination of synths and acoustic instruments – the ambiguous harmony. It was so far beyond my understanding of what music did at the time that it just seemed like emotional magic.

Kat: Kamasi Washington – anything and everything on Spotify by him. His cover of  Clair de Lune is absolutely mind blowing – every hair on the back of my neck goes up every time I hear it! Also the original version of This is What You are by Mario Biondi – I am a bit obsessed with it!

Al: I’ve been really enjoying Rob Luft’s Life is the Dancer, Fish – Weltscherz, Ajoyo – War Chant – they’re all quite texturally rich things pushing at what their styles usually do. I’m a prog rock fan from my teens and love music that plays around structurally as well as sonically. All three of these recordings do that in different but satisfying ways.

Kat: Recently – Omar at the Del La Warr in lockdown – because he is such an inventive and joyous performer; The James Taylor Quartet in January 2020, we got to be the  support act, and his Hammond playing is off the scale! His Debussy playing at the soundcheck was truly amazing too. Favourite ever has to be Mary Coughlan live at The Mean Fiddler in the 90’s. When she sings, she sounds like she is tearing out her own intestines, plus everyone else’s heart and soul. Absolutely spellbinding.

Al: That’s tough. I saw Jon Cleary a little while ago at the Lantern in Bristol and that was pretty much flawless for me. I loved the intimacy of that venue. The band were killer and clearly having so much fun, really nailing that New Orleans vibe. They made it sound like it was still fresh and exciting for them without being gimmicky. I just loved it. It’s very rare for me not to have a list of notes of things that I thought could be better!

Kat: Jacob Collier‘s livestreams are fun, really enjoying them, such a lot of talent in such a young person.

Al: I’ve still yet to really get into watching livestreams on a regular basis. I grew up listening to studio albums so I’ve kind of defaulted to doing that again. Obviously you should check out Kat’s Lullabies with Miss Kitty – which is what inspired me to suggest collaborating. Also The Sound Cellar in Dorset run by Rob Palmer has some cool modern jazz things coming up on Sundays. I’ll be tuning in for Tim Motzer on Feb 7. Neal Richardson’s Splash Point Jazz are doing a regular Thursdays slot as a socially distanced mainstream quartet as well.

Kat: Take full advantage of your spare time, learn new riffs, improve your online presence and chat to your friends often. Don’t worry about the things you can’t control, just focus instead on what you can control.

Al: Collaborate to stay sane, get stuff out there and don’t be precious. With human contact so restricted it’s easy to feel ‘what’s the point’ but, certainly for me, just chatting to other people and finding opportunities to be creative together keeps me going. I’ve had some lovely messages from non-musicians as well saying that hearing the music I make and being part of the Pointless Beauty Community group on Facebook, where we share stuff that brings us joy, is really contributing to their mental health. It’s a symbiotic thing. We’ve just got to stay in the loop and make new loops when the old ones run their course.

Al: I’m constantly working on new things and one off collaborations – it’s too much fun not to! My major project at the moment is to raise awareness (and funds) so that I can afford to record a new Pointless Beauty quintet album later this year. It’s tentatively titled Hearts Full of Grace and will feature Gary Alesbrook, George Cooper, Jon Clark & Ant Law. I’ll be releasing updates about that through my Bandcamp & website so you’ll get info if you follow me through either of those.

The collaboration with Kat was a bit of a whim on my part. We’d been on a couple of courses provided by Jazz South and Jazz Promotion Network and run by The Hub, so we’d got to know each other a little through those. Then I heard Kat’s Lullabies with Ms Kitty livestream and just found myself thinking. These are great songs. Kat has a fabulous voice. She’s always really positive and life affirming whenever we’ve interacted and seems to like what I do. I wonder if she’d be interested in letting me re-interpret some of her work from my musical perspective so I messaged her to ask. And here we are!

Kat: Yes loads, I do write all the time, between 2 and 3 songs per month, which my band, The Fabulous Red Diesel arrange and play. We have been livestreaming on Facebook and I livestream there on Tuesday, Wednesday and Thursday evening at 9pm. I’ve done over 160 solo livestream shows and I love doing it.

My collaboration with Al began when we met at an online group mentoring course organised by Jazz South and Jazz Promotion Network and run by The Hub. I heard some of his beautiful improvised music online at his Pointless Beauty site,  and offered a bit of flute to go with it, which he accepted. I sent over a WAV, he added it and from there we progressed to me sending one of my songs, vocal WAV only, for Al to play with. The song is called Ocean Blue, and the resulting collaboration is absolutely beautiful.

Kat: A lot of live gigs, I miss gigging so much! And  to carry on promoting our new album, The Queensbury House Sessions. Our lead track is Butterfly Mind, and we need to get it out there.

To perform our theatre show about suicide and mental health. Sparkly Bird, at Brighton Fringe, in June. It has dance, aerial performance and a narrator as well as 12 original tunes which tell a true story. Also The Rye Jazz festival in August, and hopefully the Cheltenham Jazz Festival – we were booked last year but – you know!!!

Al: Have a beer and a hug with everyone! I think it’s going to be really emotional when we’re all allowed to interact properly, in person, again. On a musical front I’m in discussions to organise a tour for my Pointless Beauty quintet next year through No Place Arts to showcase the upcoming album. It’s still early days so I can’t talk too much about exact shape of it yet but it’s an ambitious project for sure.

You can find Kat Lee-Ryan and her music online here and Al Swainger here.

We’ll be sharing their collaboration Oceans of Blue this week in our New Music Friday feature, but in the meantime you can enjoy it here.