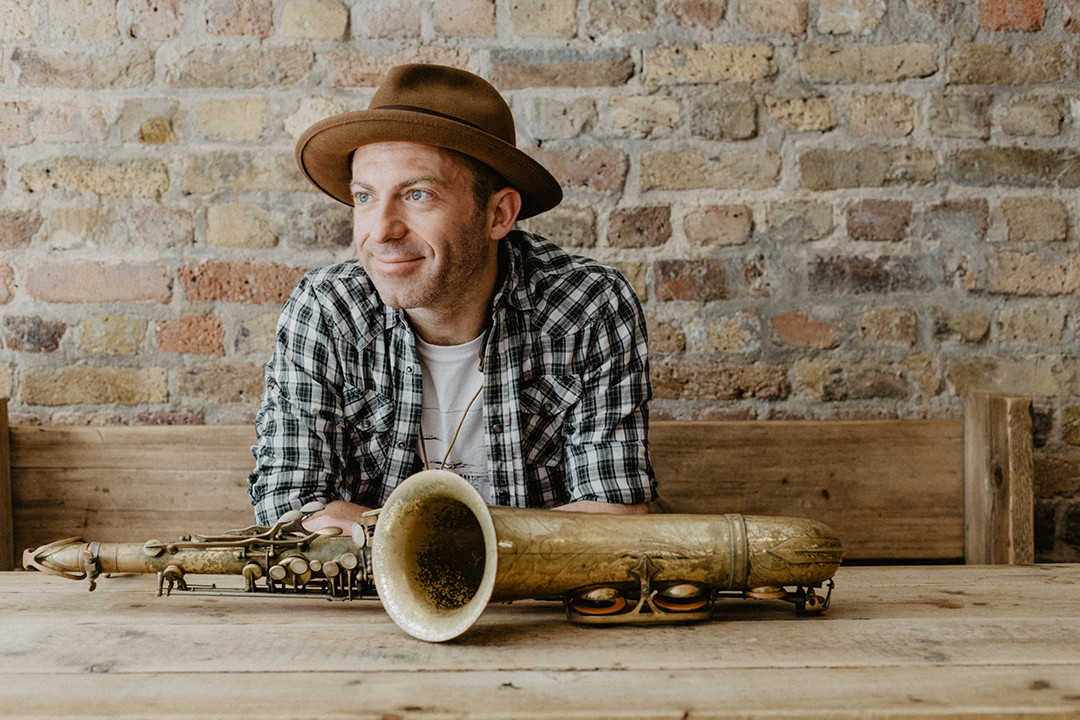 Jamie Harber catches up with jazz composer, musician and educator, Ben Somers, who is based in St Leonard’s on Sea, East Sussex.

My dad is a musician, predominantly in the field of Country Music, Bluegrass & Americana, but has a love for most music. As well as being a musician he was a radio presenter for BBC Cambridgeshire for many years. At various points I worked in the station answering phones etc, it meant I had access to loads of music. I  regularly raided the cupboards and took home records and CDs that they would be unlikely to play.

I think the first thing I really got into was Art Pepper, I forget the name of the album but it had his version of ‘Besame Mucho’ on which I became obsessed with. Shortly after that I got hold of another of his albums ‘Art Pepper + 11’ which is still one of my favourites. Marty Paitch, the arranger on this album is a big inspiration to me, I enjoy his unconventional line-ups and exploration of timbre.

An interesting question. So much jazz I love is a culmination of the writing and the playing, intention & soul of the players which I’m not sure I can separate so I don’t think I can  answer with something from the idiom of Jazz.

I write lyrics and have released many of my own songs, great song writing is definitely a passion for me so I’m going to answer from that perspective. One of the first people to spring to mind because we lost him to COVID recently is John Prine. A diligent and prolific writer who could say so much with so little. His song ‘Souvenirs’ makes me well up every time I hear it, with its beautiful cynicism, maybe we should call it observation, and positive momentum whilst writhing in nostalgia. I wish I’d written that one!

I’ve been listening a lot to the releases on Dave Douglas’ record label ‘Greenleaf Music‘. They have a great Bandcamp page with many new releases. It gives me the feeling of being involved in something, to be around a new and evolving music scene.

I’ve also been listening a lot to the ‘NYC Jazz Podcast’. There are some wonderful inspiring insights from extremely interesting and thoughtful musicians. One I would highly recommend to any jazz musicians is the interview with saxophonist/composer Ellery Eskelin.

One of my favourites was in the old Vortex on Church Street in Stoke Newington, London, with Brian Blade and Mark Johnson with Wolfgang Muthspiel. Brian and Mark absolutely blew me away with their listening and dynamics. They played so quietly and intensely that they always had somewhere else they could take it.

Yes! There is a great duo gig with Bill Frisell and Thomas Morgan. My girlfriend and I watched this on a dark night during one of the lockdowns. There’s something very special about the way these two play together. It gave back to us a sense of movement, development & sensitivity to another human, it just feels like real life to me. All of these things are seldom felt or experienced since March 2020. Check it out!

Keep talking! It’s very easy to isolate ourselves, particularly during this time when everything that we feel defines us as self driven, creative musicians has been taken away.

We can’t gig, airing our compositions perhaps feels pointless as there aren’t such outlets for their performance and no close end in sight. Although this is the case, we still have our individual creativity, inspiration and passion within us and I feel it’s our duty to support each other and talk and create together. The platform has changed for the moment but we haven’t.

I wrote and recorded a piece for three saxophones at the end of last summer. I had come to the conclusion that lamenting the loss of our ‘normal’ lives wasn’t helpful and that working with, even welcoming the new one made more sense. You can listen to ‘A New Dawn’ here.

Frankly, I’ve been writing and recording obsessively since March 2020. A very positive aspect has been that I’ve really been forced to think about who I am as a musician/composer. I’ve enjoyed experimenting with my voice and the other instruments and genres that I’ve been working at since becoming a musician. Through this process and trying to find music to listen to that makes me feel the things I’m missing has helped me to realise the elements I crave in music are individuality, vulnerability and honesty.

These realisations coincide with having met up with one of my favourite bass players, Greg Cohen, back in December 2019 in Berlin. The concepts he introduced me to came at a good time. He talked about playing with Ornette Coleman and the great power of individuality, also letting go of ego and working one’s hardest to make whatever is happening around you sound and feel good at all times.

I’m lucky that my girlfriend, Josephine Davies, is also a saxophonist/composer so we’ve had each other to bounce ideas off and play with. We’re planning to release some music together of pieces we’ve written and played a lot over the last 9 months.

Josephine and I recorded an EP (Two Cities) in December with the fantastic Christine Tobin and Phil Robson, which was an enriching experience that hopefully we’ll gig when the universe permits. I’m currently working on some of my dad’s folk music for his new record and another EP with two of my closest friends and colleagues Rob Updegraff (guitar) and Wes Gibbens (drums). Two incredibly deep musicians who have distinct personalities in their writing and playing. We’ve played together so much over the years in many contexts (we had a weekly gig with my dad in London playing Country/Jazz). We’re also working on some original music for release soon.

You can listen to some of the music I’ve been working on over the lockdowns on my Bandcamp page.

I’m planning, like most musicians, to do as much playing with other people as possible. I would really like to gig the ‘Two Cities’ project with Josephine, Phil & Christine and most definitely get back to playing with my dad.

I had been writing a lot for my quartet and sextet (I play sax in both of these), we had a monthly residency upstairs at Ronnie Scotts with the septet.  Both groups were really beginning to come alive so I would love to reconnect with both of those.