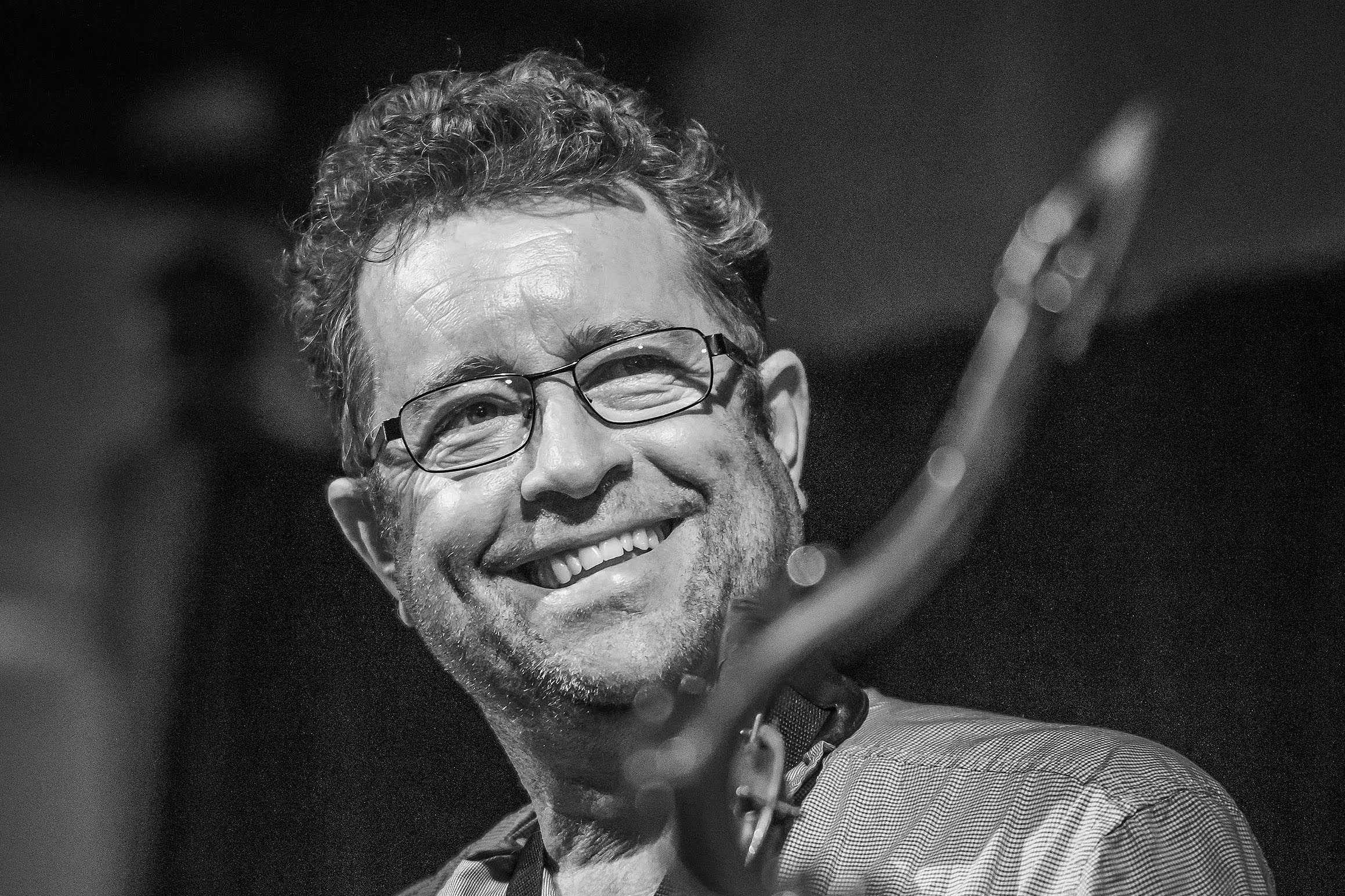 How did you begin your career as a jazz promoter and what do you love the most about your job?

I became a jazz promoter by accident – I’m really a musician (saxophonist, singer and MD). This happened towards the end of 2010 when my old friend Sue Edwards called. She’d recently started managing a new trio called Phronesis, and I’d recently moved to Ashburton in Devon. She was planning a South West tour for the band and had a couple free dates in Feb 2011. She asked if I knew any venues in the area. I’d heard that St Lawrence Chapel in Ashburton contained a decent piano, so I looked into it, discovered it could hold 100 people, and indeed there is a Yamaha baby grand there (it’s the area’s ABRSM exam venue). There was a lovely feel to the >700 year old place, and I decided to hire it and put the band on there.

A couple weeks later, their album won the ‘Best (Jazz) Album 2010’ awards in Jazzwise and Mojo magazines, and they started getting a lot of press coverage (a lot for jazz anyway!). Some combination of the award being all over the poster I made, plus the novelty of such a thing happening in this sleepy town made it a sell out. The record label, Edition, advertised the tour extensively in various national press, so I started getting approaches from other touring bands from London and around the country asking if they could come and play, so ‘Ashburton Live’ was born as an irregular series.

There were a few more gigs each year until by 2018 there were 39! That year was also when I helped launch Ashburton Arts Centre in the town’s old Methodist Church. We bought this amazing building at auction in 2017 with money donated and loaned by people in town (but that’s another story!). Since then we’ve had over 200 gigs and other events, including some of the best music in the world – jazz, folk, classical and all sorts of stuff, from touring and local professionals, and community groups and amateurs of all ages who live around here.

It’s easy to fill a venue for an artist who’s a household name, and those gigs can be wonderful. What I really love is seeing a room full of people watching a performance by people that they’ve probably never heard of before, and loving it. Being part of that atmosphere where the whole audience is completely fascinated and absorbed in what is happening in front of them, and knowing that I enabled it to happen is an amazing feeling. Often the hardest part of the complex equation that gets you to that point is working out how to persuade people to buy tickets and come out to be present at a gig, when there are so many competing attractions. I love it when I feel like I’ve worked out a way to crack that! Sometimes it’s made easier by an artist providing great images or reviews; others I need to find the right way to prompt people to give something a try. Unfortunately, I often don’t manage it, and we have an amazing performance to a small audience. That always feels like a failure, but the buzz when it all works is just great.

Is it a career? I don’t think so, at least not yet, but if it is, it all started when I discovered Darlington Arts Centre as a teenager, and saw the Contemporary Music Tours of the 1980s there, and people like Doctor John (even though I had no idea who I was watching at the time!). Something about that made me want to put on gigs, and I’ve been doing that ever since.

The AKU Trio from Glasgow (where I was born) jumped out at me the other day. I listened to the band’s new album, Blind Fury on Bandcamp and loved it. Then today the Tom Ollendorff Trio has been keeping me company in the form of a preview of a great album due out this year. Others that have been caressing my eardrums lately have been Billie Bottle and the Multiple, Jonathan Gee, Hugh Nankivell and there’s a superb young trio from Ashburton that goes by the name of This Ain’t Jazz who mix jazz and hip hop influences in a great way.

How has the promotions industry changed for you this year?

Well, I’ve seen a lot more of my wife and daughter! My version of the ‘promotions industry’ is to try and make good things happen in this community arts centre where I run the programme. In the last couple of years a lot of that has been putting on great musicians from wherever who might be passing our way.

Since the first lockdown eased in September, but still in a way where there was no way to make plans further ahead than a few days or weeks, I’ve found I’ve been trying harder to put on gigs by musicians who are based around here in South Devon – and there are loads! So if it all gets cancelled again, it’s not such a big deal for everyone, risking money booking transport or accommodation, or publicising a big tour. We’ve had some superb nights out of that. I hope we can do more as soon as possible.

Another thing that’s changed has been sorting out live streaming of events. This started without an audience with Sam Walker, the Haldon quartet and a new monthly poetry night. Discovering that with my Zoom H4N, my laptop and the Arts Centre’s WIFI, we could do a half-decent job of this was a revelation, and it’s clear that getting even better at doing this especially when a live audience is also there is going to have to become a permanent fixture. The camera couldn’t really cope when Nigel Price brought his quartet in November, with Vasilis Xenopoulos but a shimmer of light in the middle of the stage. But capturing the moment when Craig Milverton joined the band to trade solos on two Hammond organs (we have one!) with Ross Stanley (who brought his own) was all worth it.

Moving forward, what advice do you have for fellow promoters adjusting to the new normal?

I don’t really feel qualified to be giving out ‘advice’ to promoters, and I don’t think anyone knows quite what the ‘new normal’ is going to be just yet. I think that it’ll involve a lot of live streaming alongside live gigs, now that so many of us have worked out how to do that – though as soon as we get to where people feel relaxed about being in the company of strangers indoors, and we can get live audiences back, I think there’s going to be a clamouring for people to be in the same room as the performers – at least I hope so!

When I lived in Bristol, I sang with the Exultate Singers who did regular concerts in St James’s Priory, a medieval chapel in the shadow of the bus station there – that’s a special place.

That’s really hard! I’m going to cheat with two. Last year a highlight of our Tinners Moon Festival was a percussion concert, by the Arx Duo from Seattle. The star of the show was the ‘Harmonic Canon’, two long bells joined together back to back, and mounted on a frame so that they could revolve when being ‘played’. This huge thing (which weighs a ton – literally) was designed by Marcus Vergette, a fine South West bass player and sculptor. You can see it ending the show, and hear it if you listen carefully here.

And then in March 2018, before we were really up and running properly at Ashburton Arts Centre, I saw a plea on Facebook on Monday for a French band whose gig in Brighton had been cancelled on Wednesday, and could anyone help. The logistics seemed to work, so I offered to put them on and we managed to scrape together an audience of about 25 people, and we were treated to a beautiful night. We hadn’t yet managed to acquire the lovely old Bluthner piano we have now, but had just been given an upright piano that was more or less in tune. My wife, who’s not always a big jazz fan was there and wrote an ecstatic review of what we witnessed. The last ten minutes are here.

When we did our first live stream I noticed that the fact that it was coming from a ‘proper’ venue was a big improvement over many of the live streams I’d seen musicians doing from home. It seemed to be a combination of the ambience of the venue, and the effect this had on the performers. Though I’m sure that over the last six months musicians have got better at putting on a great show online, wherever they are.

Towards the end of 2020, I watched several gigs that had been live streamed from Ronnie Scott’s – the quality of the sound and video there – and of course the music – was exceptional. A genius musician who’s definitely mastered it is Adrian Cox. He’s an extraordinary clarinettist and has brought his magic to Ashburton Arts Centre every year since we opened. He’s been doing a weekly ‘Sunday Service’ which I’d highly recommend.

Haha! I can only imagine it’s the same for everyone: I want the audience to believe me when I say “this is going to be great – please come!”

I genuinely try to be as truthful as possible when publicising concerts – if it’s something in the more esoteric realms of contemporary music, then I’ll say so. If I say “this is the sort of jazz that even people who ‘don’t like jazz’ will love”, then they almost certainly will! Take a chance – bring your wife/boyfriend/parent/next-door neighbour, and they’ll be really glad they came. I’ve lost count of the number of times someone in the audience has said to me, “why isn’t this place packed? This is so good!”

Have a little faith and try something you’ve never heard of. Going out to see live music is a bit like doing exercise. You can always think of reasons not to do it, but once you do, you very rarely ever regret it! Yes it’s the music, but it’s also the unpredictable things that happen – the chat in the interval that leads to a new project,  the time you have just to open your mind to the music, and to whatever else might slip in when you least expect it.