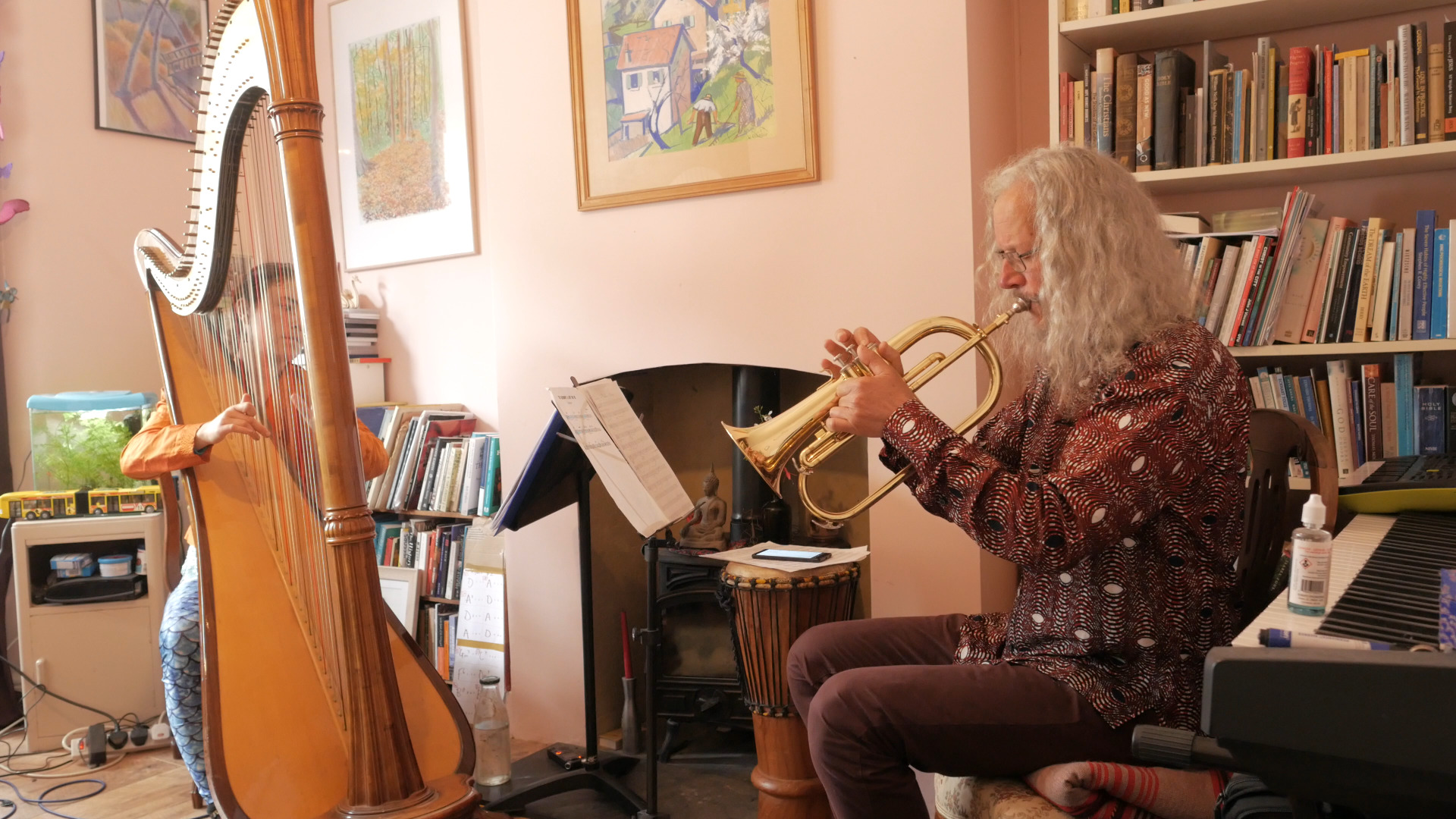 Sophie Wales catches up with David Mowat, composer, musician, Chai For All and BEJE band leader, and promoter.

We’ve been checking-in with promoters throughout the South to see how their lockdown experience has been, and how they’ve been adjusting to the new normal.

‘Fuzz’ Townsend, a Latin teacher at Sevenoaks School taught me the blues and chemistry teacher ‘Willie B’ Bleyberg taught me Thelonius Monk tunes and took me to see Eddie Thompson at Colchester Jazz Club in about 1972. My big brother’s generation then were into Miles’s ‘Bitches Brew’ album.

‘Blue in Green’. The chord sequence mood and circular feel perfectly fit my intuitive, eyes-closed approach to trumpet playing and my inner melancholia, a place I’m at home in. It’s like I’m inside Miles in a timeless way (on a good night).

How did you begin your career as a jazz promoter and what do you love the most about it?

‘Career’ is a big word. I began it through loosing confidence as a small-band leader following a marital break up and three years of development work with hill farmers in Nepal when I didn’t touch my horn much; it was easier to be a facilitator than a front-line player.

More recently I’ve been putting on gigs in Bristol care settings during lockdown. I love bringing diverse people together and raising consciousness, for instance the way spirituality experienced in music transcends religious boundaries.

I’m working with kora player Moussa Kouyate again this year after a break and have his music in my head, as I work out an improvised jazz approach. And this year I met Mohamed Errebbaa, a Gnawa Master gimbre player and singer from Morocco whose music is uplifting and inspiring.

Moving forward, what advice do you have for fellow promoters and musicians adjusting to the new normal?

See your work as one of service, not as a commercial proposition. I was lucky to get the various grants on offer, the emergency ACE grant, the self-employed scheme and Help Musicians monies and have this feeling that the state indirectly is recognising the value of my role. So I don’t stress (at the moment) about earning little, but do what you can to keep the show on the road.

Obviously within that statement I recognise my privilege. I can afford to take that line and plenty of promoters, let alone musicians, cannot. I strive to find the opportunity in the crisis rather than waste energy on lamentation. Right now I’m putting on single-musician gigs in a care home car park because the rules allow for this. It’s what you can do that counts, not what you can’t do.

Taunton CICCIC because Richard and Andrew are dedicated and flexible, understanding the nexus of live music, visual arts, a big bar and good lighting. Plus there’s a great curry house round the corner to feed the band after the sound check. My band BEJE has had several great gigs there, notably with Yunmi Kang and Sangyeon Park in 2019.

There’ve been so many! Perhaps the African Roots of Jazz night with poet Edson Burton and Dennis Rollins’s Griots to Garage show at Seymours Family Club c 2002.

To be absolutely honest I haven’t listened to livestreamed concerts other than listen back (critically) to those I’ve been involved in. A wonderful new collaborator, Emmy Broughton and I did a perhaps rather niche story-telling gig with which ends with a tribute to my mentor Keith Tippett here. More accessible is the Bristol Refugee Festival Moussa Kouyate gig: Celebrating Sanctuary at Home : Moussa Kouyate and his band.

To discover something new, to transcend what you think you know, or you like, and fall in love with everyone there and not there. The performers are only ever a means to this deeper reality. Well you did say ’embrace’.

Yes, constantly. I’m always trying (and failing) to master 19th century etudes in my trumpet practice. In my project with Moussa Kouyate we’re trying something difficult, a fusion between the Coltrane-ish jazz ecstacy that BEJE (Bristol European Jazz Ensemble) has sometimes touched on, and the sweet vibe of the Malian kora.

This year I’ve explored spoken word, beat poetry you might say, and I hope to write something about Moussa now, a griot in Bristol this last twenty years. It’s early days in this November lockdown, but as we’re a pro band, we’re allowed to rehearse and are working on it.