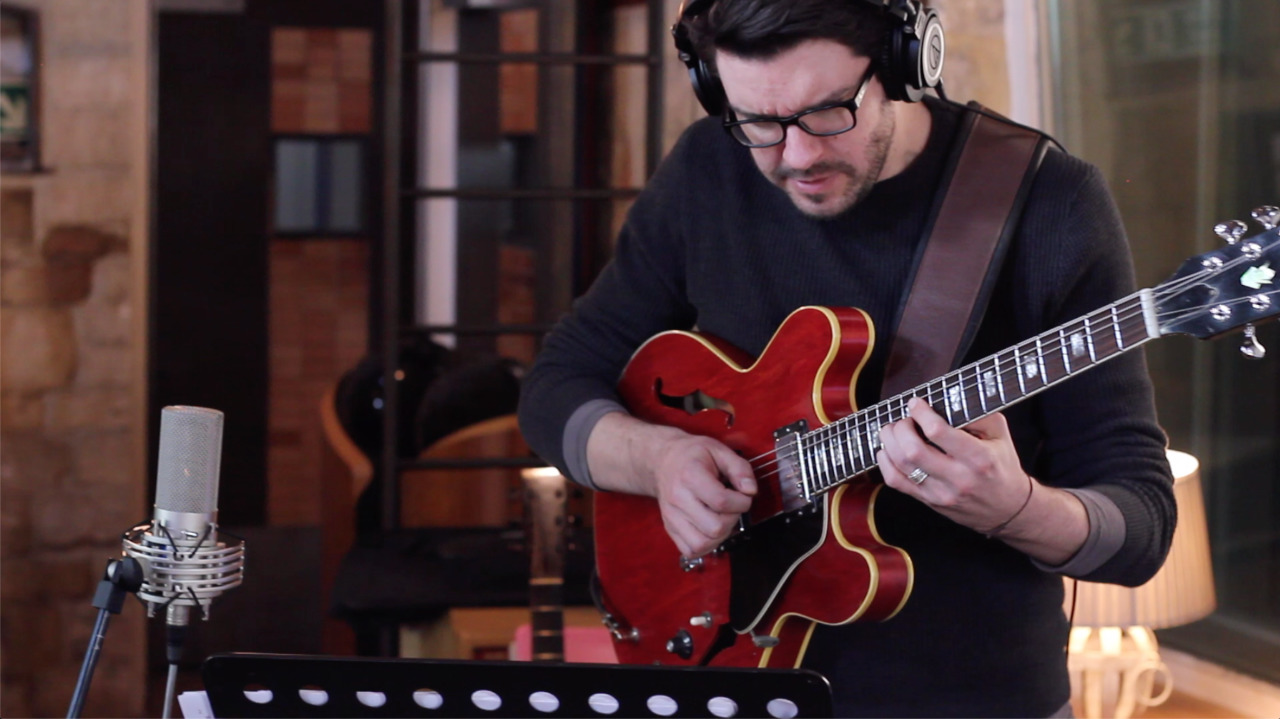 Sophie Wales catches up with guitarist, composer, and educator Steve Banks, who is based in Bristol.

As a teenager I bought ‘Kind of Blue’ from my very small local Virgin music store and listened on repeat until I could sing all the solos! I had a brilliant guitar teacher who explained harmony and introduced me to improvising guitarists including Scott Henderson and Wes Montgomery.

I also went to summer schools at Leeds College of Music where I met and played with jazz musicians for the first time, which was incredible.

That’s tough. I’d say ‘Endless Stars’ by Fred Hersch, it’s beautifully conceived in so many ways. Fred is such an inspiration to me as a composer.

Quite a lot! Walter Smith III ‘Twio’ and John Scofield ‘Combo 66’ for the lyricism, groove, and ensemble interplay. These bands are so free in their improvisations and constantly taking risks, creating an honesty, focus, and excitement in the music, which is inspiring for me as it reflects what I’m aiming for myself.

Maria Schneider ‘Data Lords’ was released recently. I’m a big fan of the rich harmonies, melodies and arrangements of Maria’s music, alongside her approach to creating music and the music industry. Oh, and plenty of Charlie Parker . . .

Another tough one! John Scofield Trio with Larry Goldings and Greg Hutchinson at Colston Hall as part of Bristol Jazz Festival could be it . . . I think we’re really lucky in Bristol to have Fringe Jazz run by Jon Taylor. I’ve seen some incredible music there including bands led by Jason Rebello, Iain Ballamy and Andrew Bain.

Local musicians including Jason Rebello, Huw Warren and Iain Ballamy are streaming concerts. It’s worth investigating jazz festivals and venues across the UK as many are promoting concert series. Patreon sites including NQ Jazz have plenty of music on offer.

Sara Colman and I performed a duo concert as part of Around The Houses online festival which presents an impressive list of artist performances and raises money for Help Musicians charity.

You can also tune in to major US and European venues. . . a good place to start is investigating favourite artists via websites and social media to see what they’re up to as many are also doing their own thing alongside offering tuition and a window into their creative process.

Creating, collaborating and connecting through online performances can offer new ways for musicians to develop their careers. This can be through live streaming or pre-recorded concerts, perhaps offering a Q&A option to connect with the audience, online lessons and courses, etc.

Musicians now have a potentially unlimited audience and can play with, participate with and learn from musicians online in ways that were far less available pre-lockdown. The world has become much better connected and musicians, venues and organisations are supporting one another as they share common experiences. There is an opportunity for us all to find out how we can take part.

I’m always trying to become more fluent through practicing, as a player, composer and educator. I’ve developed some great new resources for private students, which has been fun.

I’ve been working on music for a new trio with Will Harris and Andrew Bain alongside plans for my regular quintet with Rebecca Nash, Nick Dover, Jules Jackson and Mark Whitlam.

I’m planning an exciting collaboration with my quintet and Chris Lucas, a local videographer/artist involving recording a suite of new music with live video, images and animation for 2021 release. I’m also looking forward to playing Greg Cordez’s new music from his upcoming album recorded with a band of stellar US musicians.

The Sara Colman Band (sextet + string quartet) will be releasing music celebrating Joni Mitchell, which was recorded at Real World Studios pre-lockdown. It sounds incredible and live-streamed performances are currently being planned. It will be wonderful to be on stage again amongst those sounds . . .