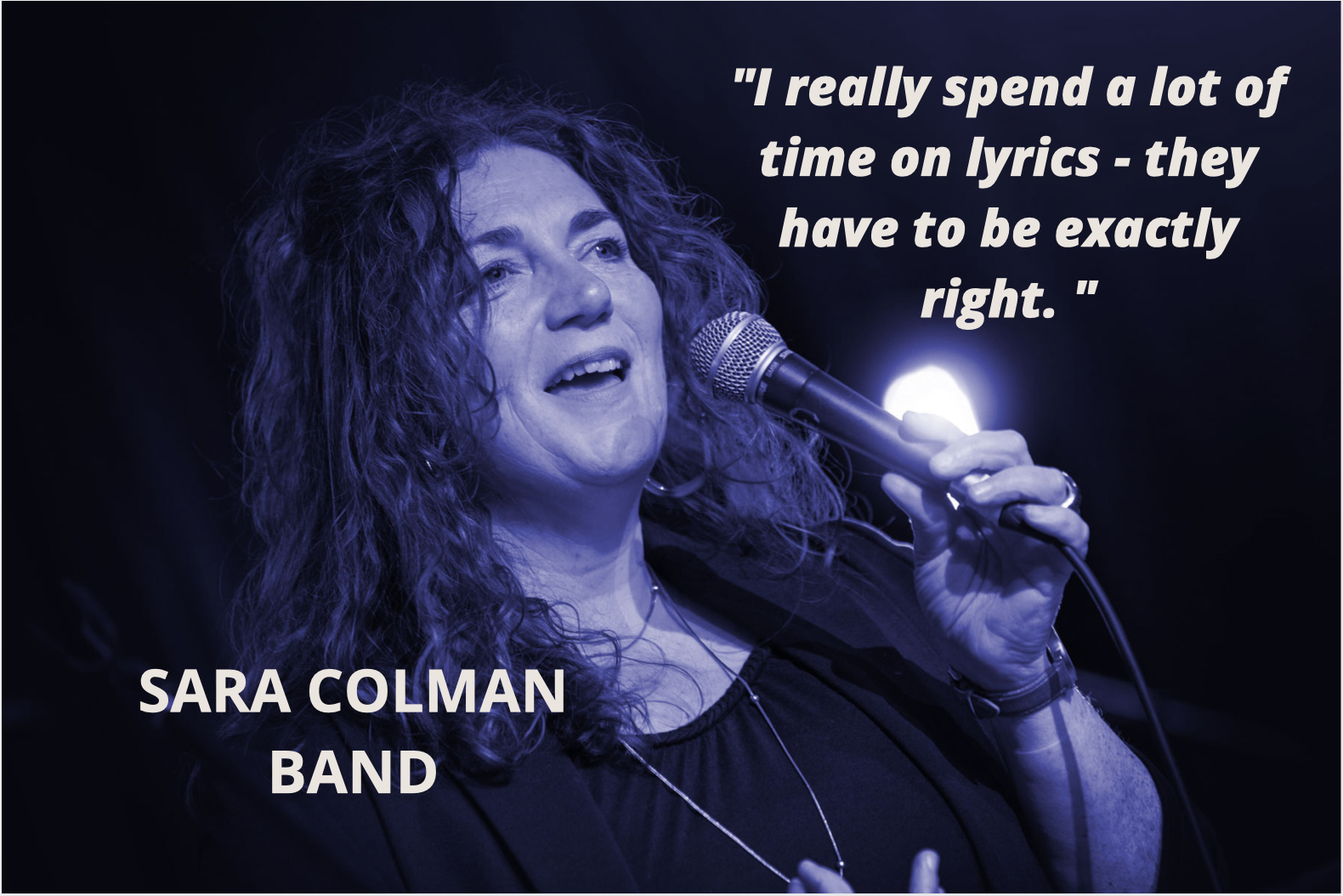 Jazz South interns Sophie Wales and Megija Petinena caught up with composer and vocalist Sara Colman to discuss her song writing process and how she found her incredible band.

Sara, in 2019 you were awarded Lyricist of the Year – an incredible achievement. What’s your song-writing process and what do you find comes first – the melody or the lyrics?

My song writing process is ….. always different! Sometimes it’s the music, sometimes the melody, probably most often the words. I was especially delighted to have received that award because I really spend a lot of time on lyrics – they have to be exactly right. They are like sculpture, you keep chipping away until there is nothing extra, nothing left except exactly what you want to say – I guess that’s why it takes a long time. I love collaborating and have been doing a lot of that over the last year or two, with pianist Rebecca Nash, lyricist Hannah Hind and guitarist Steve Banks. I’ve also been doing some song-writing hideaways and workshops with friend and singer songwriter Sophie Bancroft. This has been so illuminating in terms of really seeing my own habits as a songwriter. We tend to limit ourselves and stick with what we know – working alongside someone else can make us all a bit bolder.

Your second and most recent album ‘What We’re Made Of’ has been praised by Jazzwise for its ‘refusal to be corralled by convention’. How important was it to give yourself complete freedom to experiment throughout the creation of this body of work?

Complete freedom is totally at the heart of how we developed and recorded this music. It was very much a studio album – we recorded lots of the tracks with what we thought would be guide vocals and then kept some of them with some overdubs. We added backing vocals, double tracks, percussion and so on. There was a lot of creation in the studio and that was a new experience for me – all the music I recorded to that point was pretty much live and recorded in a couple of days. This was a few months in the making. Nothing was set in stone and each song had its own momentum and settling point.

Sara, you’ve mentioned how lucky you feel to have worked with such an incredible group of musicians who have brought so much to your latest album. How did these collaborations come about, and how did you form your band?

The musicians on this album are true gems, full of integrity and musicality – I am very lucky to have been given the opportunity to collaborate with old and new friends. Steve Banks and I spent a lot of time working on the guitar arrangements and writing some of the songs together. He is my husband and blessed with patience I can only dream of! I have worked with Ben Markland for about 25 years – a mega bass player and superb sound engineer, who musically directs the band when we perform live. The talented Jonathan Silk plays drums and wrote the string arrangements for most of the songs on the album as well as the new Joni Mitchell celebrations in our live programme. I had seen but never recorded with Adriano Adewale and it was very special to have his authenticity and joy for music in our recording. Rebecca Nash is a fantastic piano and Rhodes player; we seem to like a lot of the same things about music and have a symbiotic experience when we play together. Percy Pursglove on trumpet and flugelhorn is my improvising inspiration, with his clear identity: lyrical and bold. The multi-talented Jules Jackson also co-wrote, string arranged and played on the album too. Nick Dover who owns Canyon Sound was a big part of the recording creating a home from home studio environment which was brilliant, especially as the album took so long to make! Nick is a talented jazz musician with broad musical interest who made tasty suggestions and co-wrote a song too.