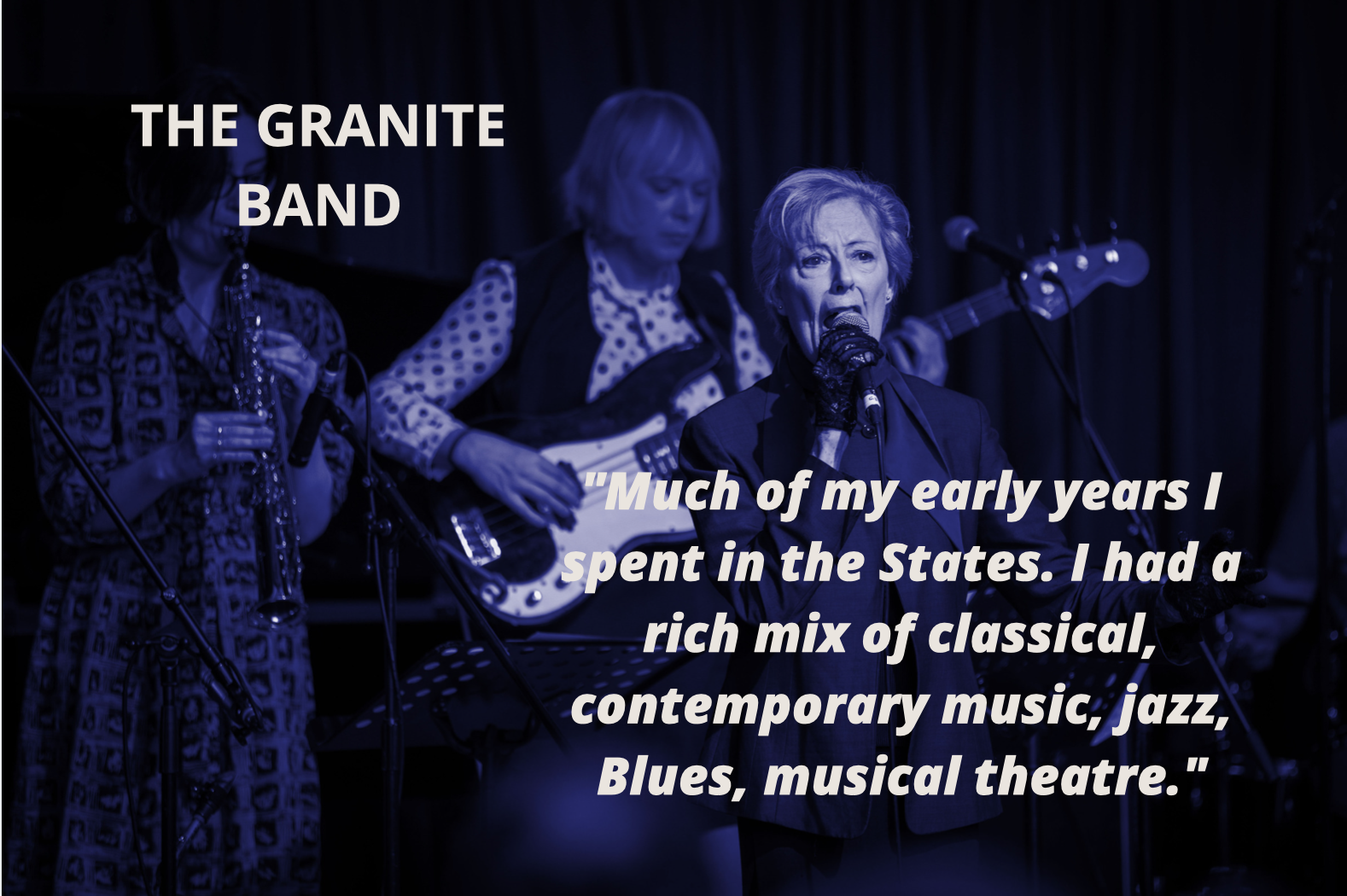 Jazz South interns Sophie Wales and Megija Petinena spoke to Kate Westbrook about forming The Granite Band as a collective and her advice for young jazz musicians.

Your most recent album ‘Granite’ is rich in story-telling and poetry, conjuring up vivid imagery. How did this composition come about, and how did you form together as a collective to create this body of work?

All the members of the band live in Devon. Mike has run a big band here in the West Country for a few years. Gradually, each of the musicians (who later became Graniteers), joined. A German friend commissioned me to write a piece and we share a love of Dartmoor with its quarries, and the tramway. So together Mike and I wrote ‘Granite’, my texts inspired by that love of Dartmoor, and Mike’s music springing from that same source. As far as the story goes, we follow a granite creature through the seasons and over aeons of time. As the composition evolved each of the musicians took their place in the sound of the ensemble.

Roz Harding is a highly intelligent and inventive saxophonist that I admire. Jesse Molins is a fine guitarist who is classically trained and works well with Matthew North who comes from a rock background. Billie Bottle is an exceptional multi-instrumentalist. In the piece ‘Granite’ she plays electric bass, but on my forthcoming album she also plays piano and sings. Coach York is a fine drummer and considerable force both in Mike’s big band and in our 7-piece band. Mike plays piano and keyboard and I sing. We all get on famously together.

What inspires your approach to music, and which artists influence your style?

I studied Fine Art at University and I paint and exhibit. My interest in art, literature and music all feed into the song writing. I find there are basic approaches to painting and to song writing, in which one discipline informs the other. Much of my early years I spent in the States. I had a rich mix of classical, contemporary music, jazz, blues, musical theatre. When I was young pop was pretty rubbish until Elvis and The Beatles came along. Jazz became the main staple of my adult musical diet, right from New Orleans through giants such as Dizzy, Miles and Ellington. Singers I enjoy and who have influenced me include Anita O’Day, Billie Holiday, Ella, and I particularly admire and love Betty Carter.

In 1974 I joined a small acoustic band the Mike Westbrook Brass Band. Initially I played tenor horn and piccolo and sang a couple of songs. As time went on I sang more and I started to write lyrics which Mike then set to music. Sometimes Mike has composed an instrumental to which I write words. Over time this collaboration led to operas, music-theatre pieces, an oratorio and many individual songs. We toured through the year mostly in Europe, and occasionally as far afield as Australia, North America and the Far East. Most of my musical life has been working with Mike, but from time to time I have performed with classical composers such as Michael Finnissy and Philip Clark, and with jazz composer Heribert Leuchter. I have performed with classical ensembles from the LSO to a West-Country-based contemporary group called Lavolta. My influences are broad and my voice as a writer grows from all these influences.

With your long and broad experience, what advice do you have for people who want to form their own jazz bands, or those who are making their own jazz music?

As well as a life in jazz I have worked in the contemporary music scene from time to time. I have to say I find the jazz ethos encourages creativity and is wonderfully democratic. But surviving, forming a band and making new work, are undoubtedly a struggle, but a struggle that is well worth pursuing. Many people teach or become session musicians. Mike and I have been fortunate over these many years to live by writing and performing with the occasional workshop. It has not been easy I have to say, but it has been immensely rewarding.

You can find information about The Granite Band on our website