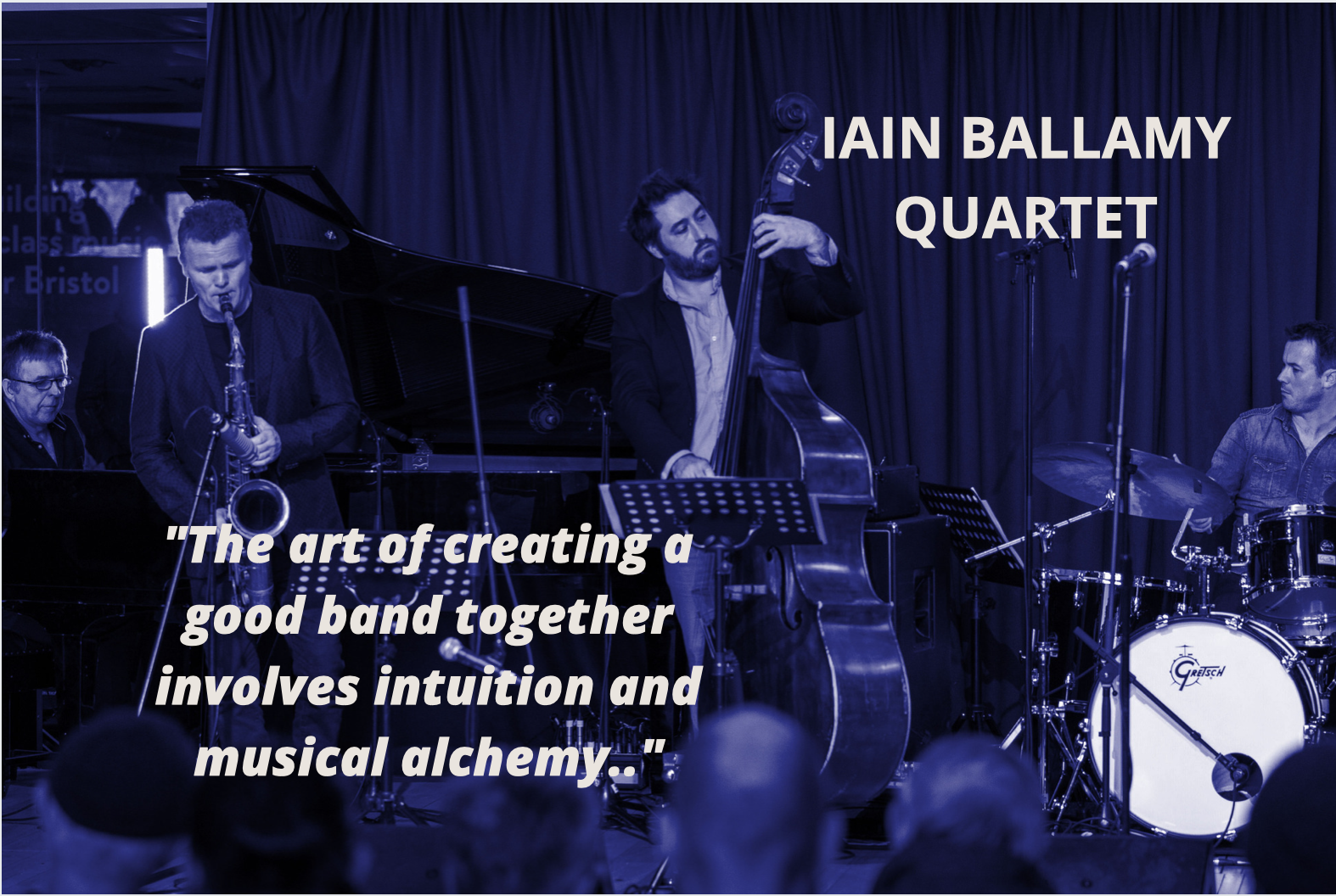 Jazz South interns Sophie Wales and Megija Petinena spoke to saxophonist Iain Ballamy about his ambitions for The Iain Ballamy Quartet and how it began.

As a band you are all highly established jazz musicians in your own right. How did you come together to form The Iain Ballamy Quartet?

The art of creating a good band together involves intuition and musical alchemy. It’s not just a case of putting good players together, it’s the combination of the players with their unique individuality that creates a reaction. An inspired group of players makes a recognisable constellation, one that adds up to more than the sum of its parts. I chose my players carefully for both their human and musical characters. After playing some gigs in Bristol I got in contact with people like Percy Pursglove on bass and Mark Whitlam on drums. Jason Rebello (piano) and Mark Whitlam also live near me in Bath. The idea was that we can get together and play regularly, cutting down on travel time. We wanted to be more sustainable, whilst not compromising musically.

I haven’t started a new band for quite some time because my bands have tended to go on for number of years – for example, Quercus has been going for 15 years. I don’t do a quick project and next year think: “Oh I want to do something else”. When I established the quartet I tried not to think too much about it being a big deal or a new band because otherwise it’s like dating: there’s too much pressure. I wanted this project to evolve slowly and naturally. Through both Platform South and local gigs, the band have been able to play in places where I wouldn’t necessarily normally perform which has been a nice way to slowly develop together.

What are your hopes and ambitions for the newly formed Iain Ballamy Quartet?

I’m currently doing a tour in the South and Midlands. What I am enjoying is playing regularly with the same people. When you get the chance for this to happen the music evolves and you are tempted to try new things. Things move quicker when you have a row of dates, so playing often is something that I try to keep going. I hope to play regularly together to achieve ultimate familiarity and also to experiment with new repertoire for the band, working towards an album. Also I would like to play in places we wouldn’t normally reach, such as new towns and venues. It’s always nice to go to new places. This is where Platform South helps!

Through your experience of touring and creating music, how do you perceive the jazz scene within the UK to have changed over the years?

It has changed very little in some ways, existing at grassroot level in small venues around the country run by devoted enthusiasts, while the latest so called “jazz revival” comes and goes from time to time. The big difference is the standard of the young up-and-coming players, with so many great musicians and well-trained students coming through colleges and shaping the future. I think I am one of the last generations who didn’t go through formal study – I learned the old fashioned way, being hands-on and watching. There are positives and negatives for people being trained in college, because it makes the approach to the music more academic and sometimes more of a science than art. But the good news is that more skilled young musicians are making their way into jazz. We just need the audience to wake up and open their ears and actively support this great music!