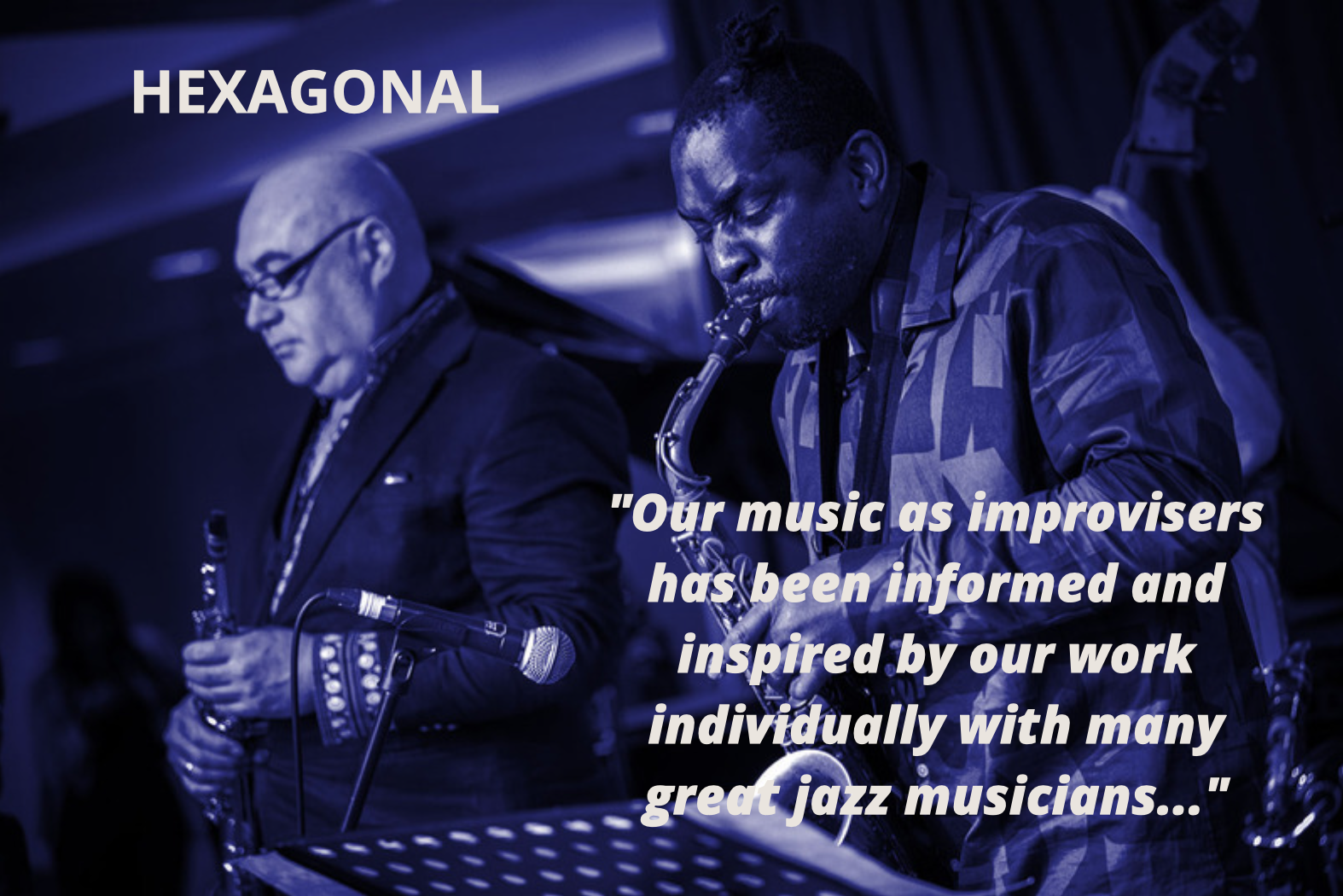 Jazz South interns Sophie Wales and Megija Petinena caught up with bass player Simon Thorpe from Hexagonal to talk about the band’s musical influences and establishing a sound.

Having formed in late 2016, you haven’t been together too long as a band. How have you established and developed your sound within this period of time, or was this something that instantly clicked when you first formed?

We had known each other for many years on the music scene and had shared a love for this genre of music, in particular the work of Hexagonal’s two main inspirations, McCoy Tyner and Bheki Mseleku. I think the idea first came from John Donaldson, who suggested that we could expand our existing band from a quartet to a sextet. It made sense to get Jason Yarde involved, particularly as he’d worked with McCoy Tyner, and so with Jason and Greg on saxes, the band was conceived. The empathy was there from the start; we were not only delighted to play the compositions together but were inspired to develop the sound of the band in our own direction. The natural progression of this has been to create our own compositions, both individually and as an ensemble. In doing this we’ve been able to create platforms for each of the players as well as structures for improvisation and group interaction. Through this process we’ve further developed the palette of sounds the band makes.

You’ve each worked with some incredible musicians, the likes of Bheki Mseleku, McCoy Tyner, Amy Winehouse and so on. What did you learn from these artists and how has it influenced your music?

Our music as improvisers has been informed and inspired by our work individually with many great jazz musicians. But it has also been broadened by exposure to and creation of larger scale works in the contemporary music world. Inevitably too, performing with esteemed artists of pop music has improved our own performing and communication skills. This means that our music is developing to become more accessible as well as having more depth – an elusive combination prevalent in the music of many of the greats.

Your album McCoy & Mseleku covers the works of McCoy Tyner and Bheki Mseleku. With jazz making its way back into mainstream music in the UK, how important did you feel it was to share this body of work with the world?

The music of McCoy Tyner is well-known throughout the jazz world, but of course deserves an even greater audience, having had such an influence on generations of musicians since his rise in the early 1960s. The work of Bheki Mseleku is less known in the wider music world, but his unique talent, together with the place of music in South African social history, deserves much wider exposure. No other musician has emerged from that country with Bheki’s combination of infectious rhythm, sophisticated harmony and above all a unique melodic gift. His music appeals to listeners, dancers and scholars alike, and people who hear his music for the first time are often astounded by its immediate appeal and then by its fascination and lasting depth.

Our music is available for purchase on: Bandcamp, CD Baby and iTunes