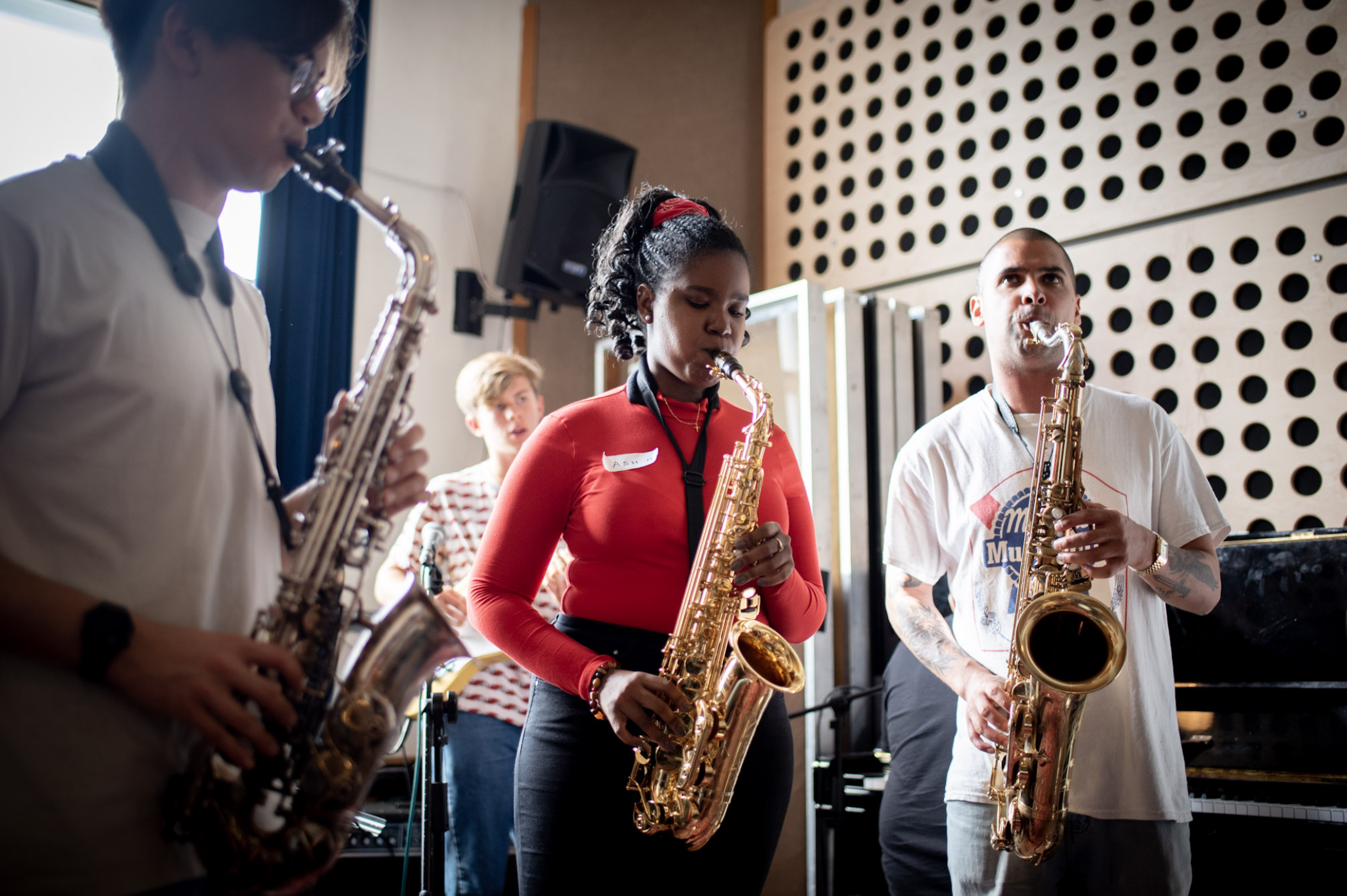 Ash: It was bright and early on Saturday morning, the day was housed in Electric Studios in Brighton, a multi-media content creation and recording studio all rolled into one, with several rooms for musicians  and a cafe/bar at the front of the building for networking and socialising before the day really started. This was great to calm a few nerves and set the tone for a really supportive day right from the get-go.

Tamsin: I was really looking forward to seeing the venue. It’s great to find out first hand what facilities there are in different locations and this seemed a great resource within the Sussex University area. Of course I was curious to see who and how many people would come along to a brand new jazz summer school. This must have been nerve-wracking for organisers Eddie and Jack during the promotion period running up to the day – as you will find out, they did a great job of attracting all kinds of people along!

How was the day set up?

Ash: The day was divided into two halves with a lunch break in-between. The attendees were split into three groups to go on a rotatory basis around each of the different workshops that focused mainly on three areas: rhythm with Pete Hill, harmony with Ashley Henry and Rob Luft, and improvisation with Binker Golding. Each session was around an hour. I was quite impressed with the amount of information the tutors were able to convey in such a short space of time, and also the way in which each workshop built on the principles of the other. After lunch, the group was organised into small ensembles based on varied ability and experience, so each could perform as a real band. From there each ensemble learned two songs which were then performed at the end of the day in one of the live rooms.

Tamsin: Yes, you really did read that right – we had access to absolutely incredible tutors. All are currently London based and included BBC New Generation Jazz Artist (Rob Luft)  – who stood in for Shirley Tetteh who was sadly unavailable, MOBO award winner (Binker Golding), Sony signed artist (Ashley Henry) and Brighton legend now moved to the capital, Pete Hill.  They all brought their own individual perspectives and approaches to improvising which was a privilege to be party to. The summer school was aimed to be inclusive to musicians of any age, ability or experience of jazz, and the tutors managed to incorporate each and every person as a crucial part of the music. Such great role models for the participants, sharing their skills and approaches to forging new paths in jazz. 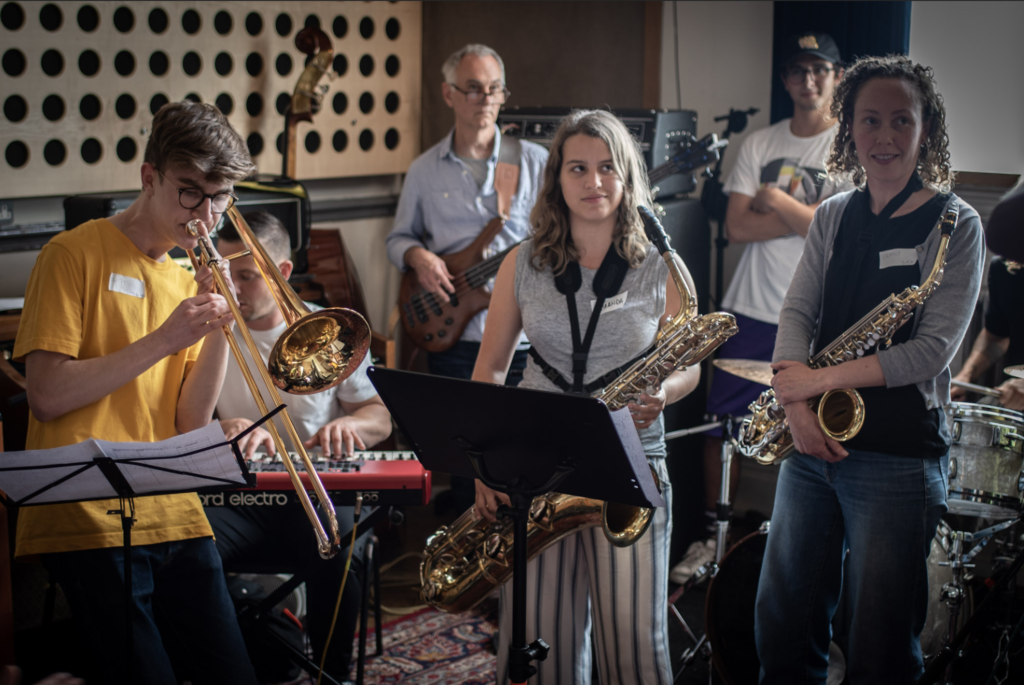 Ash: A nice mix of around 40 people attended, so it felt more like a community than a class, the youngest person was around 10 and the oldest was 87. although the highlight of the day for me was meeting the tutors, each accomplished in their own right, I tried not to fan-girl too much and soak up as much information as possible!

Tamsin: It was fascinating to find out where people came from – Brighton, London, Fareham. The word may have spread via New Generation Jazz’s stand at Love Supreme Festival earlier in the month. People came from all kinds of backgrounds and it was particularly interesting hear from some of the young people who attended – a trombonist learning jazz and classical, a newbie electric rock guitarist trying jazz for the first time and an already accomplished 11 year-old drummer who started as a toddler on pots and pans!

What did you learn from the day?

Ash: I learned so much it’s hard to pinpoint one thing, but the most valuable part of the day was meeting Binker Golding (as I am a saxophone player). He gave me a new way to approach improvisation that I will definitely be taking forward.

Tamsin: I remembered how much I enjoyed playing and performing (note to self, must do more!) and that with the right music leaders, you really can bring a mixed group of people together to create great music together – a satisfying and inclusive experience.

Would you go back or recommend to a friend?

Ash: Absolutely! any event that New Generation Jazz puts on I recommend you go. The organisers and co-founders Eddie Myer and Jack Kendon are some of the nicest people I’ve met. Their love for jazz and passion to see the jazz tradition continue came through every aspect of the day.

Tamsin: Sigh, wish I lived closer to Brighton! Yes, it was a great day that spurred me to get back to practising. I think the beauty will be that if people do return and bring along friends it will add further momentum to what New Generation Jazz are aiming to do for jazz in Brighton and around the South East. When people come forwards, they can be sign-posted to other opportunities created by Eddie and Jack, or other individual teachers/organisations. For lucky people in the area, they can continue to be inspired by regular promotions at the New Generation Jazz venue and hang, Verdict Jazz. 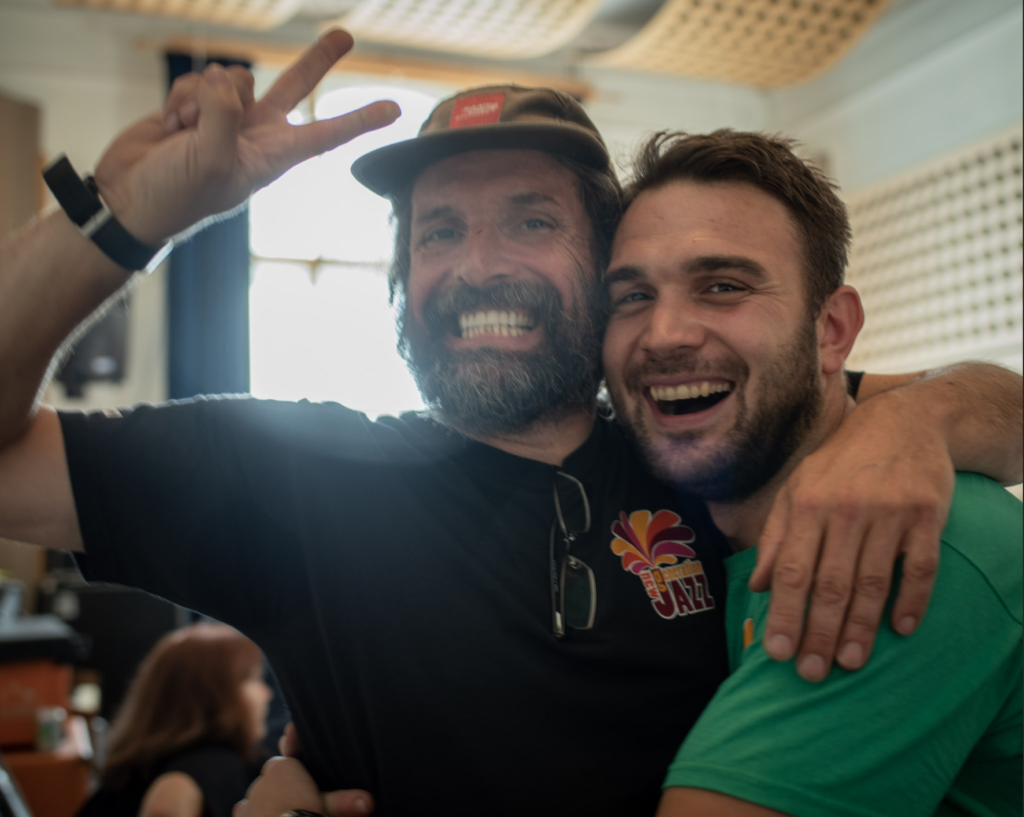